It's Spring anytime with old-fashioned rhubarb conserve for that sweet-tart taste you love. We include raisins and walnuts to make it extra special and standout. Marco Polo introduced rhubarb to Europe, and you can introduce your friends and family to the wonders of rhubarb by whipping up an elegant and eclectic streak sauce or top pork and chicken with our conserve as a base. For something warm, spicy and sweet, just add some cider vinegar, garlic, cinnamon, cloves, ginger or cumin. It'll bring them to the table.


Our E Waldo Ward & Son Strawberry Rhubarb Jam combines two distinctive, delectable, tastes into one amazing and delicious flavor. A subtle blending of light, sweet strawberry with the strong sour Rhubarb into this complex, sweet and sour Jam is simply amazing. One of the very few creations that equally suited for sweet and savory meals. Lavish your taste buds serving it on breads and pastries, or on steak, chicken, or pork. Be one of the very first to try it for yourself!

An Old Time Favorite With A Special Ward Twist! 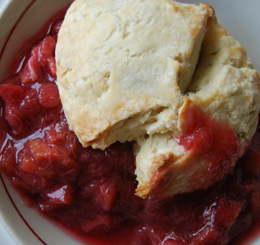 Rhubarb is a perennial vegetable that grows well in most of the United States. Used in pies, tarts and sauces, Rhubarb is old traditional favorite very popular in the colder eastern states of the US, as well as parts of Europe including England, Sweden, and Finland. Rhubarb has celery like stalks which grow in bundles. when ripe, Rhubarb is typically bright red, crimson, or even purple, yet some varieties remain green year round. The leaves of Rhubarb are poisonous, so must be handled with care. Rhubarb should be planted at the end of one side of the garden where it will not be disturbed since it may be productive for five years or more. A half-dozen plants will provide enough rhubarb for a family of four. 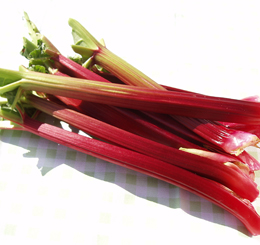 Rhubarb is grown primarily for its fleshy stalks, technically known as petioles. The use of rhubarb stems as food is a relatively recent innovation, first recorded in 17th century England, after affordable sugar became available to common people, and reaching a peak between the 20th century's two world wars. Commonly, it is stewed with sugar or used in pies and desserts, but it can also be put into savory dishes or pickled. Rhubarb can be dehydrated and infused with fruit juice. In most cases, it is infused with strawberry juice to mimic the popular strawberry rhubarb pie. Rhubarb root produces a rich brown dye similar to walnut husks. It is used in northern regions where walnut trees do not survive.
More about Rhubarb